I received email today from Frank & Judy, Greenwood area, about a Brown Turkey fig.  Here is what Frank has to say about it...

"Hello: These photos are of a Turkey Brown fig Bush that has been in the ground for eight years. It has never made it over eight feet high because it keeps getting froze back to the roots in really hard winters as the last two were.

I live between Witcherville and Greenwood about two miles to the west of Highway 71. I planted on the west side of the house, where the rainwater off the roof was free of charges, but in dry summers I give it additional water.  Last year I only had about 4-5 figs because the bush had to grow up from the roots. (Notice the old dead canes that I kept in place to support the new canes)

This year I gave it Miracle grow and all that extra rain helped boost the fig's growth, so I'm hoping for at least a couple dozen by frost. Ignore the date stamp! These shots were taken this morn.

My question: In the Ft Smith photo of three different varieties, it looks like the Turkey Brown is a tree rather than a bush. Do you recommend cutting back all the canes to one leader/trunk only to make a tree rather than a bush? One small problem is that the fig tries to constantly grow additional sucker shoots that have to be clipped back or they will suck growth out of the main part of the bush/tree.

In the summer of 2013, I had a great crop that started producing in late July and kept producing until frost, I have been pleasantly surprised  that figs seem to be virus, fungus, insect free, but the mocking birds love figs. How easy is it to start figs from slips? I tried a couple this spring and they died. Thanks for any information you can send. Frank " 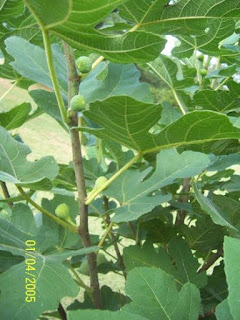 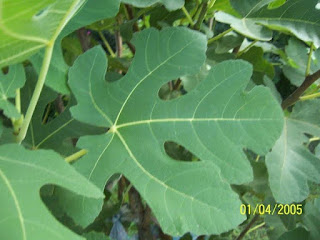 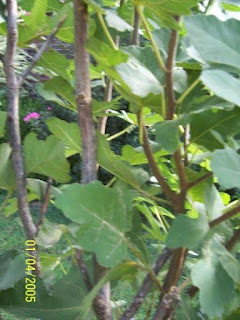 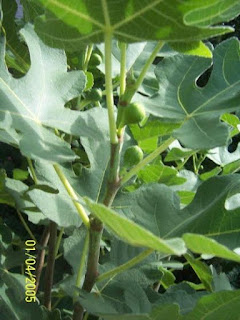 Thanks for sending photo's.  I will get them posted on the blog.

As for your questions, keep in mind there are different strains of Brown Turkey and some are more cold hardy than others.  There is no way to really tell what variety you have unless we can get a good photo of a ripe fig, the eye and the fig cut in half showing the interior.  Then I might be able to get expert opinions on the true variety of it.

We have had some extreme cold but Brown Turkey is supposed to be one of the most hardy varieties.  There is also a chance the tree was mis-labeled from wherever you got it.  It is more common than one may think.  The leaf on your tree does look very similar to my Brown Turkey.

A central leader is preferred by many who have the time to take care of the tree.  It is said to make better figs by some.  Honestly I don't know how those fig trees in the latest post survived out in the open like they are, unless they got tough before any really bad cold.  They are growing right on the banks of the Arkansas River and open to the North winds.  The owners only ever piled hay around the base of the trees.

Any variety of fig we plant in our area is recommended that we give it some sort of winter protection for at least the first several years until the trunk forms a good, thick woody bark.  Some put fence around theirs and fill it with leaves, hay or whatever and put a top of some sort so the rain runs off.  Others will wrap them and others up north will go as far to dig them up and completely bury them and dig them back up in spring time.  They still need some air circulation or they will mold, however we do it.

Starting from cuttings is tricky but not hard if you know what they want.  The biggest thing that kills them is too much water.  I buried some cuttings last fall under 4-6 inches of composted wood chips and they came up good this Spring on their own.  I also started over 300 cuttings indoors and tried to keep them alive over winter and ended up with about 70."

Those cuttings I buried in the composted wood chips were taken green from a growing tree in the Fall of 2014.  I washed them and dipped the ends in melted cheese wax to seal the ends as protection against disease and moisture loss.

They spent at least two months in the refrigerator in a ziplock bag before being buried in the wood chips in cold weather and stayed there all winter until they sprouted new fig trees in Spring.

This is the least maintenance way I know of to do cuttings. Other methods abound but whatever method is used, it is critical the cuttings do not get too much water and are in a well draining mix, preferably in a large pot that can maintain them for some time after they sprout roots and green growth.  I have tried the cup method and it is more trouble than worth.

Updated 9/19/15  Went to visit Frank and see the tree and it's not that bad looking of a fig tree at all.  Late fruiting due to last winter die-back. 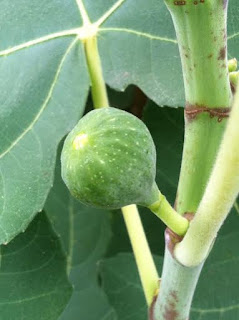 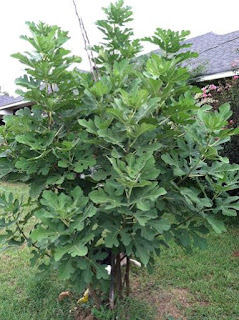 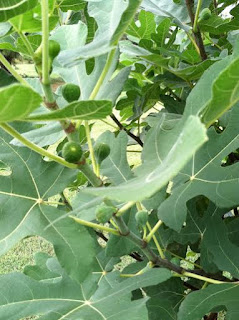 Frank's neighbor across the street has a huge fig, bush form, that was mostly winter killed back to the main trunks which are about 2.5 inches in diameter and woody bark.  I think it's a Celeste. 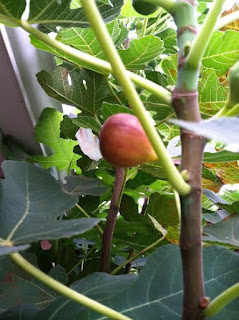 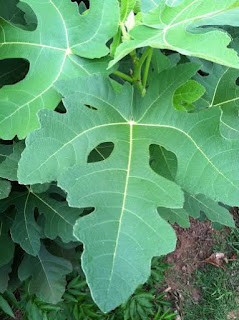 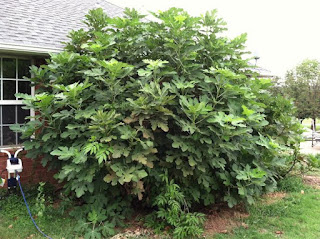 Posted by Charlie Little at 4:07 PM