As stated in previous posts, it is necessary to protect most all fig varieties in our area in Winter, until they harden and develop a thick, woody bark.  Even then, some varieties may die to the ground or die completely during extreme cold.

We have shown a method of winterizing fig trees outdoors by surrounding with a wire cylinder, filling it with dry material such as wood chips, leaves, straw, etc., and covering the top to keep it dry.

In the blog header, I wrote it was not the main purpose of this blog to focus on other varieties that would not normally be planted in our area.  The ones requiring drastic measures to ensure their survival. Well, here is a post about them.  Many are so tasty and if one is bitten by the Fig collector variety bug as I am, at times to my sorrow, one just can't get enough and will go to extremes to at least try and ensure their survival.

Last night was our first major cold snap of the season.  The bank clock in town showed the morning temperature to be 21 F.  I'm not sure it was really that cold but not far off.  So yesterday it was a mad dash to get all the figs into the garage.  A task I was not looking forward to and had been putting off getting ready for too long.

Here's the last photo's of the Fig trees before cold weather set in. 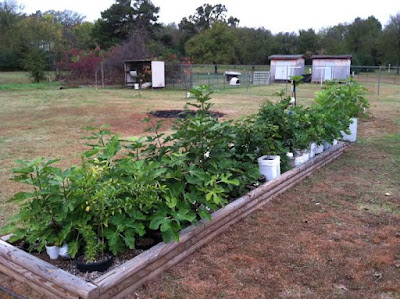 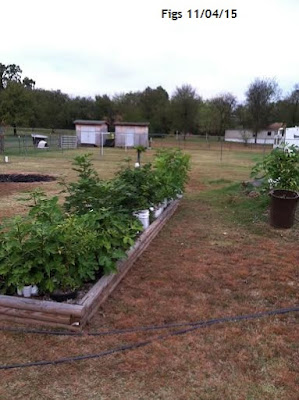 Here they are now, some of the seventy-five Fig trees of various sizes and varieties and four cold hardy Pomegranates, all placed into the garage for winter. 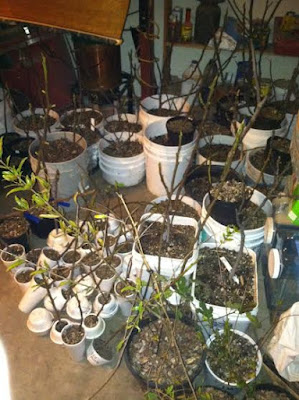 All the ones in the styrofoam cups are successful air layers done back in August and will be either traded, gifted or re-potted very soon so they won't dry out too quickly.  The rest are either second year varieties we started with in 2014 or those that survived from rooting indoors last Winter and set out in the Spring.

Their pots were buried into the wood chip compost to keep the early Summer sun from overheating the black, one-gallon pots and they all sent out roots through the drain holes in the pots and anchored themselves into the ground.  Good for the Fig trees, bad for me to have to uproot them and move them in!

Sore muscles today but glad it's finished.  The point of this post, winter protection of delicate Fig varieties inside a building or attached, unheated garage.  Most all the trees we moved in that are in five-gallon pails survived last winter in this garage and we had some temperatures in the lower teens some nights.

Our area is notorious for fluctuating temperatures during Winter.  We don't particularly like the cold but for Winter storage of dormant Fig trees, it is best for them to remain cold during this time.  What we don't want is to have a couple or few weeks of mild weather that could cause them to break dormancy and try to bud out, then for it to turn frigid.  If all goes well, it will now stay cold until Spring and that can't come soon enough for me!

This is known as the Fig Shuffle among Fig collectors of delicate varieties.  We move them in and we take them out.  We try to size the pot to fit the tree and try to use lightweight media to make it easier.  Much can be written about growing media so perhaps we will do that in a different post.

We want whatever indoor structure where our Figs will spend the winter to not freeze and not get too warm.  Somewhere in the 40's F is good.  A garage or unheated building attached to a home is usually said to be ideal.  I keep jugs of water in the garage and have never noticed any of them frozen.

We want there to be good air circulation so there is a minimized chance of mold.  One of the worst things I ever did was try to keep a few plants in a big styrofoam box set inside the garage last winter.  I lost probably half of them to mold in just a couple of weeks before I checked on them.

Figs need a little bit of water during the Winter storage.  We don't want to even come close to the amounts given during growing time but we don't want the media to dry out either.  Last Winter I gave them about a cup of water per five-gallon container every three or four weeks.  It was gauged by just sticking my finger in the media.  If it felt dry, I watered.  If it was moist, I didn't water.  Pots with oyster shell as a top dressing held moisture better than wood chips or pine bark mulch.

Most any variety of Fig can be grown and kept this way, for those who have the urge, space and ability to do so.  They do it way up North and even into Canada so if they can, so can we here also.

Posted by Charlie Little at 7:19 PM